Last Friday I had one of the most amazing conversations with Jeff Pulver, founder, and visionary of the 140 Conferences. I was so touched by my recent experiences at #140confONT and #140ConfHV that I felt I needed to bring this experience to Montreal.  After some initial research, I proceeded to set up an appointment with Jeff to discuss my proposal. I was so honored to have the chance to speak with him about his vision for the conferences and what he had in mind as he “cast” the events.

Jeff really puts himself out there, in his talks at the various conferences or at different appearances he makes, but to have the chance to talk to him on the phone was truly amazing.  What was most striking to me throughout the conversation was Jeff’s incredible emphasis on curating the event so that everyone feels good : presenters, participants, people viewing from home – I was so impressed by his true desire to make everyone feel at home and the commitment to his vision on delivering the event in a way that accomplishes this.  This is such a gift.  I can understand now , more than ever, why the energy of these #140conf events is truly incredible and can move people forward into action, into collaboration, into being the change. He sent out an email today which captured everything so beautifully: The Evolution of #140Conf: Finding Meaning .

By the end of the conversation Jeff gave me some wonderful advice, he took the time to coach me and really bring me on board. I was thrilled to receive his approval to move forward.  I am now an official Brand Ambassador for 140!!

But even more special than being made an official brand ambassador (which is pretty AWESOME) was that I was truly honored that I can now call Jeff a friend and that he placed his trust in me with this event. Although he is incredibly busy – beyond what we could imagine, he took the time to spend with me. I am so grateful for that time. 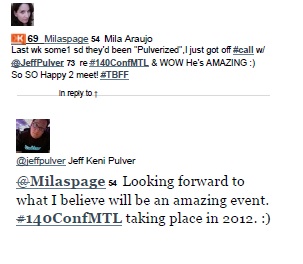 I have been so touched by the out pour of support from the Twitter community: my friends, #usguys, #140Conf participants, and so many wonderful people ready to get involved and help. So for this, I want to say THANK YOU. Lets keep working together, love hearing from all of you, lets keep connecting.

We are going to plan for a Tweetup in Montreal coming in the next couple of months as a pre-event, and we should have more info to announce then!

Stay tuned because #140 is coming to Montreal, a city filled passion and multiculturalism to share and enjoy!

Looking forward to building and connecting as we lead up to #140confMTL which will bring the “Eyes of Social Media” to Montreal in 2012! 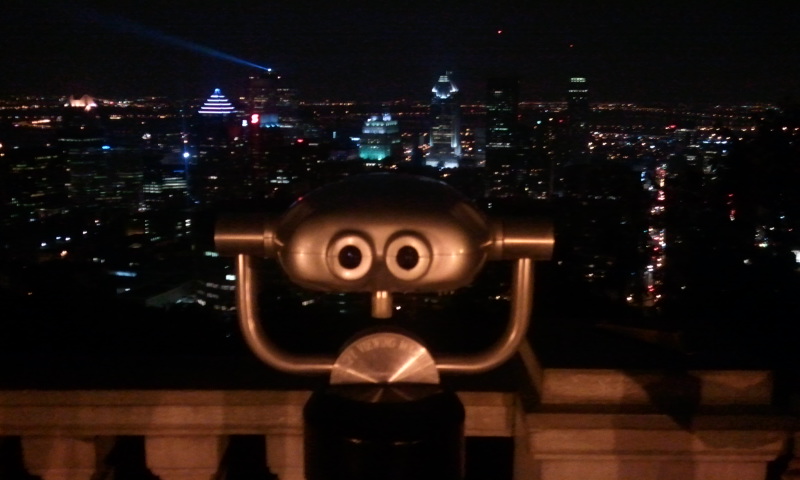 If you are interested in speaking, sponsoring, attending, learning more or being involved in any way,  follow me on Twitter @Milaspage & @140ConfMTL , join the conversation so we can keep connected and make this event great together!

Evolving together through Social Media!