A knock came at my door about an hour ago while I was having a good and valued discussion with my daughter… My daughter went to look to see who it was, coming back to report she thought it might be some religious group. I got up to check for myself – I don’t really appreciate people knocking on my door – mainly because of special times like this, having a good discussion – then someone tries to just step in.

Usually I would have ignored it, but when I saw the girl on the other side, I could tell it wasn’t a “religious intervention” visit, and thought, let me see what she wants.

I opened the door, she was from Oxfam. Well, I was in the middle of an important conversation, I wasn’t going to just let her interrupt, even though she was kind enough to give her time to a charity – I could recognize this – yet, still I have my agenda of what I am doing. I also know I have donated a lot of money to charity this month, and I have a lot of work I need to be doing, and the conversation with my daughter was high priority to me. So, I said to her, “Look, I am really sorry, I appreciate your time for coming and trying to do good, but this really isn’t a good time for me,” As I said this, I realized she probably had a thousand other people slam doors on her today, maybe I could quickly help somehow, and still get back to my conversation, “What exactly are you trying to do here today? Like, what do you need from me, what’s your goal?” – sometimes I can be frightfully direct, but when you are short on time, it’s the best way to get things done.

She was taken a back a little, struggled to give me a reply, (the elevator pitch was surely thrown off) so I asked her to just give me a pamphlet or something, and I would look into it when I have time. She asked for my phone number instead, or if she could come back.

Well, as an individual who clearly didn’t have the time now, it was unlikely I would have the time later – which I really don’t. But, I thought about this – here is a person really trying… “Sure, 5:30” I said.

It was a success because of Social media.

When I opened that door, I was really a flash second off of slamming that door in her face (well- not really but you know what I mean).  I didn’t – I didn’t because I believe in social good, and I believe in the power of people reaching out and connecting, and I believe that if she put the effort into walking around on her Saturday, then if she’s willing to fit into my time, then I am willing to listen, because if nothing else it will make her feel good.

So Where is the Lesson? 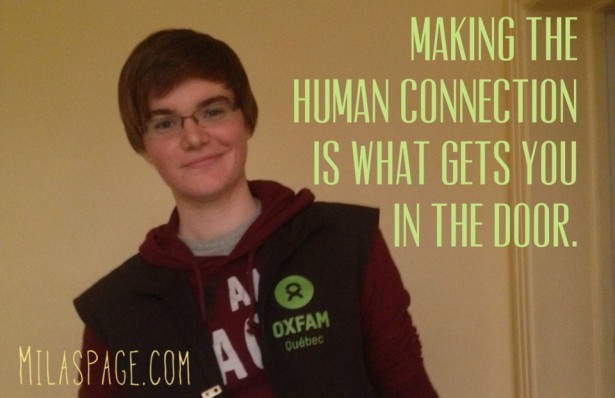 That’s a good question. I can tell you that 3 years ago, I wouldn’t have even opened the door. As I closed it and came back to the conversation I was having with my daughter, I thought to myself. Wow, social media has really changed me. Why did I make this inconvenient appointment?

It’s because of the social mindset

Now, I have an appointment with this girl in a few minutes, so I have to run, will I make a donation? I don’t know. Will I become aware of her cause, yes – and through this, now you are too. Will she leave feeling empowered, probably. Will that make a difference? Yes.

Update: I asked the kind and very well spoken Gabrielle if she would let me share her story on my blog, and she agreed.

As it turned out, her cause was very much in line with many of the things I find important. I was happy to hear about it, and thanked her for going out of her way to come back.

I wanted to share this story because in a flash of a few seconds, I truly saw how the social mindset changed me.  I want you to think about this for a minute – Has it changed you?

Then think about the implications this has in our world, I believe it has many and it’s a good thing. Companies and people who embrace social as a mindset will change this world, one person – one cause, one workplace at a time. Just like Gabrielle and her smile. So, what do you think?